Breaking The Premiership Drought…The History-Makers of 1997 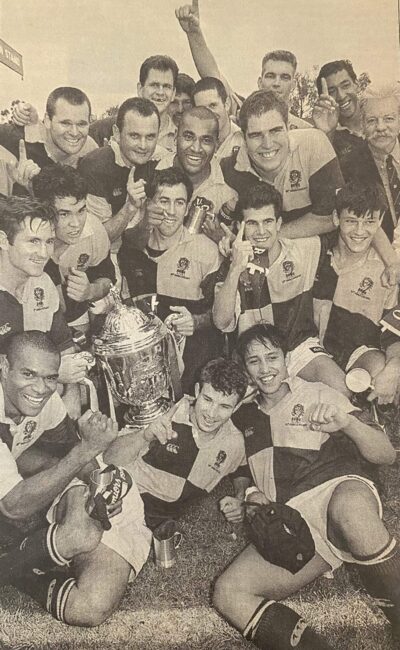 Victorious Easts winger Ricky Nalatu stood at the bar in a tiger costume and watched the tears of grown men in their 60s.

Of course, he was in costume. It was that sort of crazy, once-in-a-rugby-lifetime night in the clubhouse at Bottomley Park to celebrate the club’s maiden first grade premiership.

Just hours early at Ballymore, Easts had held firm in a tense 18-16 finish to beat Souths in the 1997 grand final to claim the Hospital Cup.

The moist eyes belonged to former players, some from the very foundation years of Easts in the late 1940s and 1950s. There were tears from players who had come oh-so-close themselves. The losing grand final teams of 1971, 1984 and 1995 had pointed the Class of 1997 in the right direction.

“I remember talking to old fellas in the club after the game and hearing how much this first premiership meant. You had an idea but you didn’t fully realise until a former Tiger in his 70s started telling you how over the moon he was,” centre JB Sullivan recalled.

All the emotion came out that day, whether it was 200-game titan Peter “Bull” Murdoch finally rejoicing, a first-year rookie like Nalatu or the delirious fans in blue-and-gold who swarmed the field at full-time.

It shone through in veteran winger Graham Holt, who had been at the club as long as Murdoch. In the Pen Pics in the grand final program, “Occupation” was listed for all the players.

Beside Holt, it read “Bootmaker (NASA)”. Everyone enjoyed pranking “Holty” just as he enjoyed pranks in return. Years earlier, he had locked flyhalf Paul Kahl in a portaloo outside the dressing rooms at St Lucia. The Tigers actually set up for kickoff with only 14 men. Then-coach Mike Thomas was apoplectic which made the incident even funnier in the retelling. 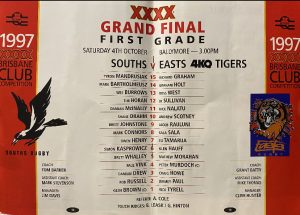 It was that sort of season with a focus on hard work, coach Grant Batty’s team building. And plenty of fun.

Twenty-five years on, the memories are still vivid for those who delivered the dream premiership in the club’s 50th year under coaches Batty and Mike Thomas.

“It felt like a crowd of 15,000 at Bottomley that night. It was an amazing night after an amazing day,” Nalatu recalled.

“I remember standing at the bar having a drink in a tiger suit with grown blokes crying around me.”

Added skipper Murdoch: “Making the grand final in 1995 was the start of the blossoming for the core of the team. To be captain and part of the ‘first’ premiership team makes me extra proud because of what it meant to the club. You could feel how special it was when the crowd ran onto the field at full-time.”

It was the climax of a surreal debut season for Nalatu. He started in third grade and scored a try with his first touch in first grade. He quickly took a liking to this rugby caper after calling time on his athletics career in 1996 when injury frustrations got the better of him. At his peak, the former Queensland 100m champion was a rapid 10.33 sec performer on the track in 1995. He could fly with the ball in his hands.

“I’d spoken to (talent scout) Cyril Connell at the Brisbane Broncos and the plan was to play at Easts in 1997 and have a crack at league the following year,” Nalatu said.

“Oh my goodness. There was no way I was playing league after ‘97. The support at the club was amazing and I really felt what a ‘team’ was all about after being involved in a very individual sport like athletics.

“I went on to play for Queensland but I’d still say the career highlight in rugby for me was that 1997 premiership and the team I played in.”

Nalatu was so fresh he didn’t even know what the “JB” stood for in the name of backline partner Sullivan. Come to think of it, some played whole careers at Easts without knowing.

James Bruce Sullivan had felt the hurt of 1995’s grand final loss to Souths when he was Easts’ sole try scorer. He knew how ready the team was on October 4, 1997 even when playing a Souths team bristling with Wallaby ace Tim Horan, Mark Connors and Brett Johnstone.

“I felt the difference in those teams. We were happy to make the grand final in ‘95. We had unfinished business in 1997,” Sullivan said.

Fullback Richard Graham felt it too: “It was a period where we had a really good group together for a considerable time.

“We also had some of the best talkers in the game with ‘Scots’, ‘Holty’ and JB so opponents copped it in barrel-loads if they wanted to niggle.”

The last thing the players saw before running onto Ballymore for that 1997 shot at history was in bold letters on a team sign in the dressing room.

It read: “Just being there is not good enough”

They needed all that resolve too when down 16-3 with 15 minutes to play. A rolling maul try to 20-year-old hooker Jeremy Paul, his ninth of a bumper season, pulled the Tigers closer.

In the 72nd minute, skipper Murdoch marshalled a huge scrum shunt that buckled the Souths pack under the posts and forced a penalty try. It’s a try not credited to any of the Easts front-row that day but burly 125kg Craig Howe, Paul and the late Rick Tyrrell never needed that to feel a huge satisfaction.

“The forwards were immense in the grand final. It’s sad that Rick (Tyrrell) is no longer with us but we never have a gathering at Easts without thinking about him and raising a glass,” Sullivan said.

Batty gathered the grand final victors downstairs at the club before letting them loose in the rampant festivities already underway everywhere else.

“It was a moment to talk about what it meant to each of us. Winning the first grand final is special in itself but it was all the more so because of the surge of club support, the total invasion of Ballymore at full-time by a sea of blue-andgold,” Sullivan said.

The grand final wasn’t over by a long shot. Halfback Jacob Rauluni had to win a frantic race to a kick-ahead over the tryline to prevent Horan dotting down for a game-stealer.

“All the boys had to make certain big plays in that grand final. All I remember is chasing as hard as I could and Timmy on the ground saying ‘look at me…that was a try’,” Rauluni recalled.

“I don’t know what you’re talking about’ is what I still say to him.

“Even after the game, it felt surreal that we’d won. It took a while to sink in.”

Rauluni had played flanker at Brisbane State High where he had instructions to make sure golden boy Scotney, at flyhalf, never needed to make a tackle.

“Scots was as tough on defence as toilet paper in the early days,” Rauluni said with a laugh, “Being serious, he had great chat and a calm head on the field and controlled games really well.”

Sullivan entered club folklore. Three days after the grand final, he was still in his striped Tigers jersey, strapping and match socks. His premiership tankard had a few dings but it was still fit for purpose. It was tied to his body at times so he wouldn’t lose it.

Prop Howe looks a little unbalanced in celebratory photos of that time. He had an eyebrow shaved off but a far bigger job was mowing half of his back hair as he slept.

“I did have a bit of a celebratory drink in my jersey,” Sullivan said.

Batty, a diminutive former All Black with giant results as a winger in the 1970s, built a fine team spirit and simple mottos like “talk, tackle and keep the ball” always made sense.

“What did I love about Easts? They were just a bunch of good quality people and we had a really well-balanced team,” said Batty, who now lives in the tiny onepub village of Wallabadar in northern NSW.

“You couldn’t meet a nicer person than Murds, who was an outstanding captain. The Tigers meant a lot to blokes like Tim Stoddart and Andrew Scotney for a long time too.

“We had a one-off grand final jersey made in a four-quartered harlequin style because it was a special occasion.

“I think coaches who have a bit of a success are primarily good selectors getting the right people in the right positions and having them believe in what you say.

“Rugby is a rare sport. You get all these different capabilities and body shapes on the same field. You can have a big, strong lock like Murds, a skinny, fast winger like Ricky Nalatu and others like Andrew Scotney who was an exceptional distributor and clear thinker when it came to seeing opportunities.

“And then you had a coaching partner like Mike Thomas. Part of his mantra was always ‘let’s have a %$*& go’. And we did.”

Holt was a Rothmans Medallist in 1993 as Brisbane’s Best and Fairest Club Player. He won premierships in three different decades in firsts, seconds, thirds and fourths. 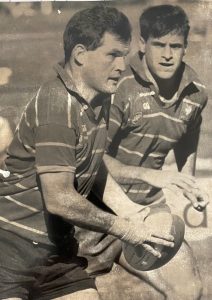 He proudly wears the “Tiger for Life” stamp as a badge of honour.

“You enjoy a moment like the 1997 grand final as a player but it felt so good for the supporters and the club as well,” Holt said.

“My parents (Bill and Joyce) were still at the club that night at 3.30am. Dad was thinking of leaving and mum just said ‘we’re not going home yet.”

“It was so special to be the club’s 50th year. I kicked the ball into touch to end the game and a split-second later I’m being flattened by a guy running onto the field from the hill at Ballymore. It was ‘Stoddy’.”

He gave strong credit to the guidance of Batty and Thomas.

“Mike was your old school Kiwi coach. He’d be in gum boots and under an umbrella on the rainiest night screaming at you to keep going,” Holt said.

“Batts was a really calming influence and great with his player management.” The 1997 premiership was the greatest of springboards for young hooker Paul. He was signed by the ACT Brumbies and just two years later was holding aloft the Rugby World Cup with the Wallabies in Cardiff. 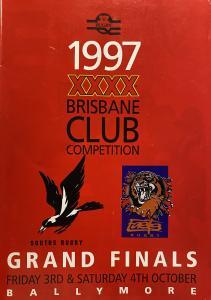 “I was a boy from Capalaba High and my Under-16s coach at Easts, Gary Jessiman, picked me up on Tuesdays, Thursdays and game days for two years to play. I’ve thanked him ever since,” Paul said.

“It all started with the Tigers…1997 was an incredibly special year and with great mates to this day.”

Do you have photos of our 1997 Grand Final to add to the collection? We’d love to hear from you, please contact us at [email protected]